Dorset's Police and Crime Panel (PCP) has been established to examine the actions and decisions of the Police and Crime Commissioner (PCC). The Panel will ensure that relevant information is made available to the public so that they can effectively hold the PCC to account. 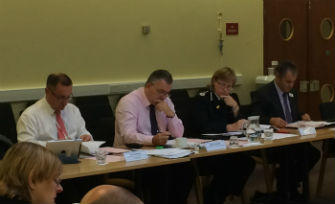 The Panel will therefore primarily focus their attention on important strategic actions and decisions made by the PCC.  This will include whether they have:

The Panel will support and challenge the PCC in carrying out their functions. The Panel does not replace Dorset Police Authority and does not have any role in scrutinising the performance of the Force - that is the role of the PCC.

Role and Powers of the Dorset Police and Crime Panel

The Panel has a range of powers to help them carry out their functions and specific responsibilities relating to the Police and Crime Plan and the Annual Report.  These include:

The Panel can also make reports or recommendations (including the power of veto with a two-thirds majority) on the PCC's proposals on:

Other specific powers held by the Police and Crime Panel include:

Dorset County Council is the lead authority responsible for the establishment and administration of the Police and Crime Panel in Dorset - further information, including details of Panel members, can be found on the Dorset For You website.

Dorset For You - Police and Crime Panel

Home Office guidelines state that Panels must be made up of at least one elected representative from each local authority (unitary, county and district) within the force area plus two independent co-optees.  There must also be at least 10 elected representatives on the Panel, with membership also reflecting the geographical and political balance of the area.

The Police & Crime Panel have powers to examine complaints against the PCC so long as they fall within the following three categories:

Should you wish to make a complaint of this nature, please review the complaints monitoring protocol and then complete this form and return to elaine.tibble@dorsetcc.gov.uk

For further information, please use the links below to either the Home Office or Dorset For You websites:

Dorset For You website - Dorset Police and Crime Panel