Latest Tweets
2 hours, 55 minutes ago
It is always important to ensure drivers avoid the ‘fatal five’ but it’s even more essential at a time we know our… https://t.co/1UA7Crbv17
Follow us

All elected Police and Crime Commissioners have been required to swear an oath of office in order to be able to take up their duties. 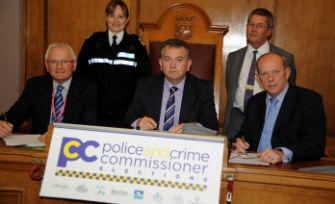 The May 2016 ceremony was overseen by Andrew Flockhart, Chief Executive for the Borough of Poole, and Paul Morris, the Police Area Returning Officer (PARO) for Dorset.

You can view the copies of the signed Declarations of Acceptance of Office for 2012 and 2016.

The wording of the oath is as follows:

"I Martyn Underhill do hereby declare that I accept the office of Police and Crime Commissioner for Dorset.

In making this declaration, I solemnly and sincerely promise that during my term of office:

I will serve all the people of Dorset in the office of Police and Crime Commissioner.

I will act with integrity and diligence in my role and, to the best of my ability, will execute the duties of my office to ensure that the police are able to cut crime and protect the public.

I will give a voice to the public, especially victims of crime, and work with other services to ensure the safety of the community and effective criminal justice.

I will take all steps within my power to ensure transparency of my decisions, so that I may be properly held to account by the public.

I will not interfere with the operational independence of police officers."