This article is a features article in Police Professional. 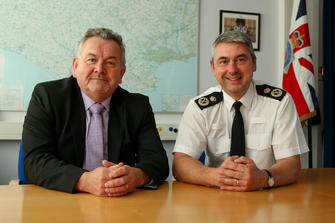 “The current allocation of responsibilities in policing at a national, regional and local level is broken, and in dire need of review.”  This is the damning conclusion of the Home Affairs Select Committee in calling for “an ambitious programme of reform” and a “transparent, root and branch review of policing …which should focus on the allocation of responsibilities and capabilities at a local, regional and national level.”

As the Police and Crime Commissioner and Chief Constable of Dorset Police, which with its collaborative partner Devon and Cornwall Police have come closer than anyone to delivering a voluntary merger of two forces, these are observations that chime with our experience.

The climate of collaborative working in UK policing is clouding over at the moment. The recent collapse of the Warwickshire and West Mercia collaboration drew gasps across policing. The collaboration, hailed as the most advanced and effective in England and Wales, stopped in its tracks only days after the collapse of the proposed merge of Dorset and Devon and Cornwall Police. The merge collapsed despite all parties agreeing that there was a strong and well made-out business case. We have recently seen other examples of forces pulling out of collaborations. Paul Griffiths, Vice President of the Superintendents’ Association, spoke to the annual conference in September 2018, where he described the findings of a survey of the Association’s membership, engaged or deployed in collaborative roles. The findings were stark, with the membership experiencing acute difficulties in managing multiple leadership structures, the ability to influence effectively and the strain on working hours, wellbeing and excessive travel. The survey concluded that 82% of respondents favoured a move to force amalgamations.

The current picture of policing partnerships is a patchwork quilt sewn by many different hands.  It is made up of scraps of collaboration between forces (in any combination you can imagine), partnerships with fire services, local authorities and other public bodies, contracts with private sector companies, highly incentivised regional collaborations (which are still not consistent in what they offer) and a centrally funded national CT network.  No two forces can describe a shared picture and there is no agreed standard. This plurality of structure is further exacerbated by disparate co-terminosity of local authority and other service boundaries. Dorset Fire and Rescue Service, for example, is merged with Wiltshire; Devon Fire and Rescue Service is merged with Somerset; the Crown Prosecution Service boundaries divide the South West region and include Hampshire; and none of these are aligned to the Community Rehabilitation Company’s area of responsibility. It is, in fact, quite remarkable that so much progress has been made in collaboration despite these intractable difficulties.

This patchwork quilt also contains the ever changing nature of relationships, egos and politics as PCCs and Chief Constables move, retire or become unelected. Worryingly, most failed partnerships in policing mirror a change at the top of a politician, a Chief Constable, or both.  Lynne Owens’ description of the challenge of getting 86 Kings and Queens to agree to a shared direction of travel is an apt one.  It also seems obvious that, whilst there should be strong relationships and co-operation between policing and its partners, the greatest synergies and opportunities lie within our own sector.  Dissipating change and leadership energy across a range of fragmented collaborations reduces our impact and the opportunities we have to save costs and transform ourselves.

The national picture is reflected in Dorset.  Dorset Police has been working tirelessly for eight years to ensure that it plays its part in delivering austerity.  We have undertaken a wide programme of transformational change to ensure that we continue to be able to keep people in Dorset safe and provide a policing service that meets public expectation.

The Force can be proud of not only delivering savings and efficiencies but of delivering high quality services, judged by our independent Inspectorate to be efficient and effective.

Dorset Police already collaborates with a number of neighbouring forces on areas of specialism such as serious and organised crime, forensics, counter terrorism and procurement.  We collaborate with other emergency services, sharing buildings and operational assets, and over the last four years have developed a very effective strategic alliance with Devon and Cornwall Police allowing us to become more effective and drive out savings.  We are disappointed that we were unsuccessful in going even further and bringing about a full merger with Devon and Cornwall which would have realised further savings still.

It is worth reflecting on the governance behind the failed merge for a moment. Police governance has changed three times in 50 years: from Police Boards to Police Authorities to Police and Crime Commissioners. In all three cases, politicians hold the Chief Constable and the Force to account.  Many people have asked why a politician gets to say no to an operationally-led merge request, which is an interesting governance dilemma for policing.

Notwithstanding the need to preserve and embrace policing by consent, is it time to reset democratic governance in relation to key operational decision-making? Policing governance resides in a unique bubble, particularly when compared to health, education and defence.  Would we conceive of asking the public what aircraft carrier or fighter aircraft the MOD should buy? Yet we ask the public about the leadership structures of a police force which, in reality, only moves governance and command structures, and would not affect the day to day policing enjoyed in communities.

Meanwhile, demand for policing is now rising at an alarming rate and crime and incidents across Dorset have increased by nearly 10% over the last year – a rise that seems set to continue without new investment in resources that enable the force both to respond to demand and to intervene early and meaningfully prevent crime and ASB.

As elsewhere, the dynamics of crime over recent years have also shifted markedly and we are now experiencing higher levels of very harmful crime such as sexual assault, domestic assault, child sexual exploitation, modern slavery, terrorism, serious organised crime and cybercrime, which pose a higher threat to the communities of Dorset.  These require more specialised and time-consuming investigation in order to protect and safeguard victims, particularly those who are vulnerable.

It is also worrying that the additional demand and falling resource in Dorset is now showing a demonstrable impact on the workforce.  The men and women of Dorset Police have worked incredibly hard to deliver so much more with so much less over recent years.  The strain is now beginning to show through an increase in stress and anxiety among the workforce and we have had to reset internal priorities to provide additional services for officers and staff to safeguard their wellbeing.

It is a matter of grave concern that reduced funding and rising harm can no longer be reconciled and there was no relief in the Chancellor’s Budget this autumn.  Over eight years of austerity, we have seen reductions in central government income in two comprehensive spending reviews and level funding since 2015. Budgets have not been protected from other inflationary costs and we have seen below inflation rises in precept funding.  This has resulted in a real term reduction in available resources to Dorset Police in excess of £25m, leading to a reduction of 500 officers and staff (20%) from the workforce.  Further unfunded pay-rises and the challenge of meeting the significant burden of the pension contribution revaluation will have the effect of removing a further £4m per annum from our budget over the course of our medium term financial plan.  In order to continue to provide the very basic level of safeguarding and emergency response the Force is having to take a fundamental look at the services it is able to provide over the coming years.  There is no way of dressing this up as anything other than reductions in service.

In his speech to the APCC/NPCC Joint Summit on the 31st October, the Home Secretary explained that “if we are to make the case for more funding, then this does have to go hand-in-hand with further reforms and to look and see what more we can do together to improve policing.”

Indeed. And we have gone as far as any force to introduce the innovative and radical structural change that policing needs.  But, ultimately, we were defeated by the way in which the service is structured and governed.  At the same summit the Policing Minister expressed a concern that, if anything, the police were taking on too much reform and that the myth of policing being ‘the last great unreformed public service’ needs to be debunked.  It certainly is not the case that policing is shy of reform – it has taken great strides to achieve transformation, which we should celebrate.  However, it is true that the fragmented nature of police governance and collaboration does not make that reform easy.  As our experience demonstrates.

We echo Sara Thornton’s words at the APCC/NPCC summit, “In many ways I think that we have exceeded expectations but surely the time has come for the Home Office to provide greater leadership of the whole system?”

We also couldn’t agree more with the Home Secretary when he says that “we need to build a smarter and better police system which is more collaborative, more innovative, more tech-savvy and less fragmented’’. We have 43 different forces and all too often it can feel like each has a different way of working and that there is sometimes a lack of join-up.

Given the national picture we have described, the nature of the challenges faced by a good force such as Dorset, and the growing body of opinion that the system as it stands is not fit for purpose, it seems to us that we are led to an inescapable conclusion.  To achieve the changes required, particularly when it comes to force mergers, the Government needs to provide leadership to achieve the Home Secretary’s objective of “a smarter and better police system which is more collaborative.”  Experience suggests that this is most effectively achieved through leading, incentivising and mandating change.  In the words of the Home Affairs Select Committee, “Sitting back and leaving it to individual police forces is irresponsible.”

The original Police Professional article can be found here >