Latest Tweets
4 hours, 31 minutes ago
RT @Chris Smith: Think of the amazing volunteers who are on call and don’t need extra risk of exposure over the next few weeks. https://t.co/bksa4zOCv5
Follow us 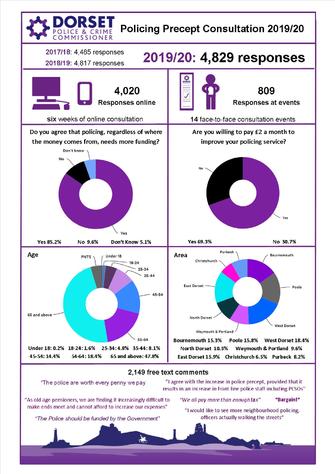 I am pleased to be able to say that the majority of Dorset residents have supported raising the policing precept by £24 a year.

During December and January, I consulted with the public to obtain their views, and was delighted to see even more Dorset residents participating in this year’s consultation. Over two thirds, 69%, of those who responded to my survey said they would pay an additional £2 per month, per Band D property, for policing services.

A total of 4,829 responses were made to the online consultation and I would like to thank everyone who took the time to take part. I have been carefully considering your responses and comments, all of which have helped me greatly in my decision making process.

This year, the survey was conducted through software and iPads were used at the face-to-face engagements to complete surveys. The survey was also promoted via local media, Dorset Alert, the OPCC website and social media.

A roadshow of face-to-face consultation events ran for two weeks. During this time, locations in Swanage, Wareham, Wimborne, Ferndown, Bridport, Weymouth, Portland, Sherborne, Gillingham, Christchurch, Bournemouth, Blandford, Dorchester and Poole were visited and over 800 consultation responses were collected across these events.

I would like to take this opportunity to thank all the OPCC volunteers who attended the consultation events this year. I am always impressed by the number of people our volunteers know when we are out at events together and their time and dedication to helping the Office of the Police & Crime Commissioner is truly appreciated.

It’s always good to catch up with local people, hear their views and talk about the complex issues that affect their neighbourhoods and policing. My request to raise the precept this year has been a reluctant one and I agree with the many residents that said to me that policing should be centrally funded. I will continue to lobby the Government on this point and keep up the pressure on them for a fairer funding settlement.

Later in the week, I will be taking the results of the consultation to the Police and Crime Panel and I hope that your positive response to raising the precept will show that the majority of residents across Dorset want their policing service to continue to grow, improve and be able to invest in tackling emerging areas of crime.