Dorset Police and Crime Commissioner Martyn Underhill has won an award for supporting diversity in the county.

The PCC was awarded the Steve Collier award at the Bourne Free Pride Weekend – Bournemouth’s long-running LGBTQ+ event which was forced to be held virtually this year as a result of the Covid-19 outbreak.

The award, named after one of the event’s founders who died from cancer in 2010, is given every year in recognition of an individual who has carried out work to promote diversity and inclusion. 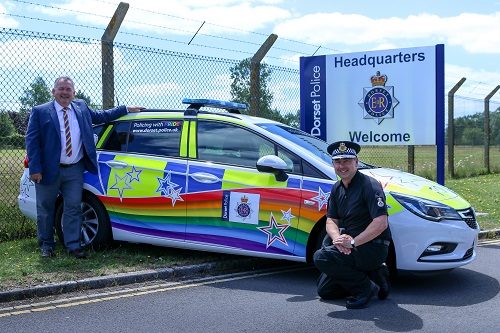 Dorset PCC Martyn Underhill said: “Bourne Free has been an important date in my diary for years, and Steve was a good friend of mine, so it’s a huge honour to have received this award.

“Championing diversity and inclusion has been a major priority of mine during my time as PCC, and it’s hugely rewarding to have this recognised.”

Mr Underhill was a trustee of Bourne Free from 2012-2019 and now serves as an ambassador, while the Office of the Police and Crime Commissioner regularly carries out engagement work with members of the public at the event alongside Dorset Police and representatives of other emergency services.

Thousands of people attended last year’s event, with more than 50 floats taking part in the main procession and over 80 organisations represented.

Last weekend’s event, which would have been the 16th Bourne Free, was replaced with a virtual Pride event held on the organisers’ Facebook page, featuring performances, messages from supporters, the launch of a community fund and the naming of the award’s recipient.

Chris Ashton, vice chair of Bourne Free, said: “We were delighted that Martyn Underhill won the Steve Collier award to mark his support for diversity in Dorset.

“Martyn has not only been an active trustee for Bourne Free for the last seven years but has also been an advocate for LBGTQ+ equality including supporting legislation in his capacity as a PCC.”

The Bourne Free Weekender will return next year, held at Meyrick Park on July 10-11, with the theme Stronger Together – Celebrating Our Emergency Services and Key Workers.