Latest Tweets
2 hours, 18 minutes ago
Just a few days left to have your say on paying more to fund policing. Click here 👉 https://t.co/VoXTW27QjB https://t.co/INUgay7YOW
Follow us 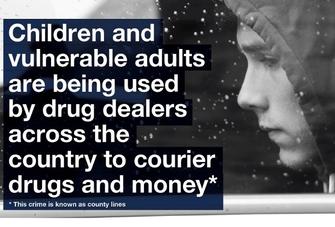 The intensification week ran from Monday 14 September until Sunday 20 September and saw extensive work by police officers and staff across the county to disrupt the work of organised drug gangs and safeguard vulnerable people.

“County lines” refers to a type of crime where drugs gangs exploit children and vulnerable adults to make them courier drugs and money across the country from the gang’s base in a large city to customers in towns across Dorset. The “county line” refers to the mobile phone line which is the link for the drugs gangs to sell drugs.

Detective Chief Inspector Andrew Dilworth said: “County lines gangs make vulnerable people – including children – work for them to sell drugs. These people can face violence and intimidation from gang members. By disrupting their activity, and making operating in Dorset difficult for these criminals, we can protect the most vulnerable members of our society from being exploited and the wider communities from drugs and gangs. These results show that we will not tolerate gangs bringing crime and disruption to Dorset.”

Martyn Underhill, Police and Crime Commissioner for Dorset, said: “Once again, Dorset Police has shown that their approach to disrupting county lines gangs is working. I would like to praise all the officers and staff involved in such an impressive set of results and I am particularly pleased to see so many arrests being made.

“The results demonstrate that, Dorset Police are tough on those who are involved in county lines and I fully support the proactive approach that has been taken in dealing with gang-related criminal activity in Dorset.

“County lines is a serious problem and the police also need support from the community in order to tackle it. By learning to spot the signs and reporting any suspicions to the police, the public can help protect victims of exploitation and I would encourage everyone to find out more about county lines to help keep the most vulnerable in our community safe.”

DCI Dilworth continued: “It is important to point out that Dorset remains one of the safest places in the country to live and work and we are working hard to keep it that way.

“On top of these great results we also did a lot of work speaking with people and raising awareness of the signs of county lines and asking people to report to us if they have concerns. We have a wealth of information on our website and, although the intensification week is over, we ask the public to remain vigilant at all times and report any concerns they have to us using our non-emergency channels or, 100% anonymously, to Crimestoppers.”

For more information on how to recognise the signs of county lines please visit Dorset Police's website: www.dorset.pnn.police.uk/countylines.

People can report to Dorset Police using our non-emergency channels https://www.dorset.police.uk/do-it-online/ or to Crimestoppers, 100% anonymously, via their website: https://crimestoppers-uk.org/ or by telephone: 0800 555111.