As many as 600 people reported instances of romance fraud each month in June, July and August, prompting concerns that romance scammers successfully exploited the national lockdown in response to the coronavirus outbreak.

Overall, reports have risen by 26% in just one year. In response to this, Dorset Police are supporting a multi-agency campaign, running throughout October. The campaign, coordinated by the City of London Police, aims to raise awareness of romance fraud, and provide clear advice on how to avoid falling victim yourself.

So… what is romance fraud?

Romance fraud is a crime in which you are convinced to send money to a person you’ve met online.  Criminals use platforms such as dating websites to target their victims, using fake profiles and social engineering tricks to build a feeling of familiarity and trust.

Often, the scammer will claim they are currently abroad but will be returning to the UK imminently, using the distance to explain why they can’t meet face to face.

Scammers often trawl platforms looking for key words – for example, ‘widowed’ or ‘divorced’. They will then tailor their profile to give themselves a similar backstory. For example, they may approach a widow or widower and subtly bring up that they lost their partner in similar circumstances. 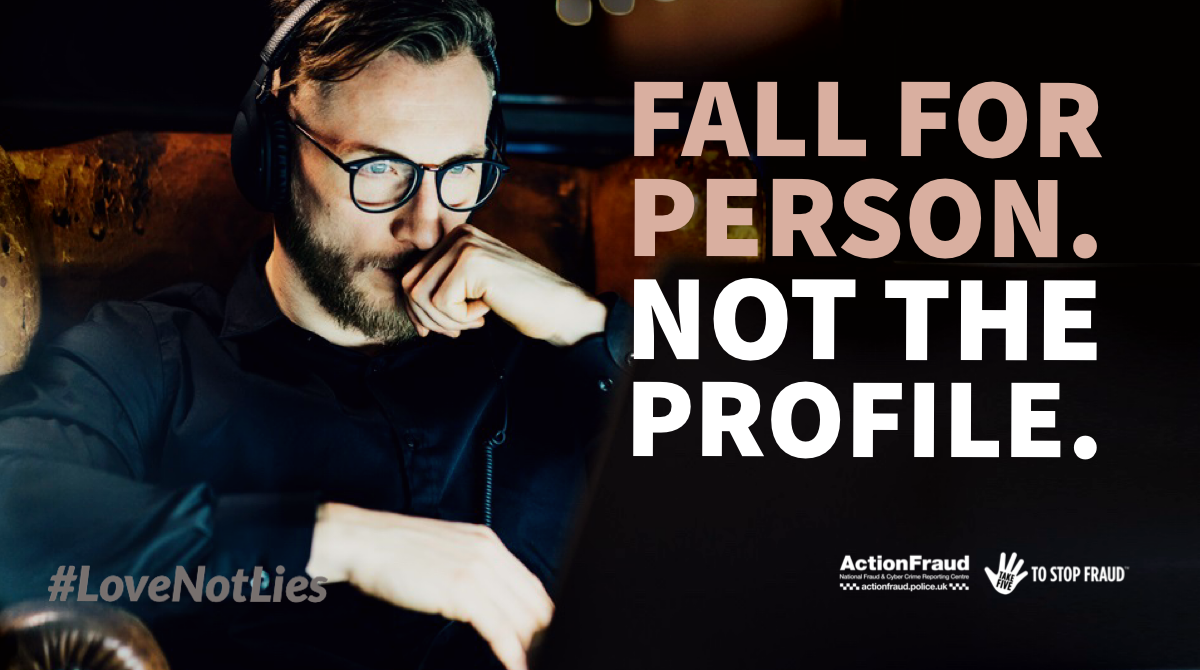 Once they feel they have their victim’s trust, the scammer with make a request for money on the promise that it will be repaid when they meet. The requests are often highly emotive. They may need help paying for emergency surgery, for example.

One Dorset victim met a male online who claimed to be a soldier, stationed in the Middle East.  As their relationship developed, the ‘soldier’ stated their intention to return to the UK.

As it got closer to their return date, a problem arose as it transpired that he could not afford to ship some of his possessions. They asked the victim if they could help, and they obliged, sending several thousand pounds by bank transfer. After this, he deleted his online dating profile and ceased all communication with the victim.

How can we avoid falling for scams like this?

There are often some tell-tale signs with romance scams. For instance, the offender will generally refuse to meet face to face. They will also state that their webcam doesn’t work, or find another way to avoid video calling.

You may also notice inconsistencies in what they tell you, compared to what is on their dating profile, and issues with their profile in general. It is also not uncommon for their photos to have been stolen from another user’s account. Try reverse image searching using your search engine of choice – this will show you if the images they are using appear elsewhere online.

More often than not, the offender will suggest moving away from the dating website, and using email or text messaging to communicate instead. This is to avoid the scrutiny of the dating site, and so they can keep targeting their victims if their profile is shut down. If someone insists on moving to a more private means of communicating, this should be seen as a big red flag.

It is all too common for people to feel embarrassed, or ashamed, and not report the incident to the police. No fraud is pleasant in any way, but romance fraud is particularly nasty. 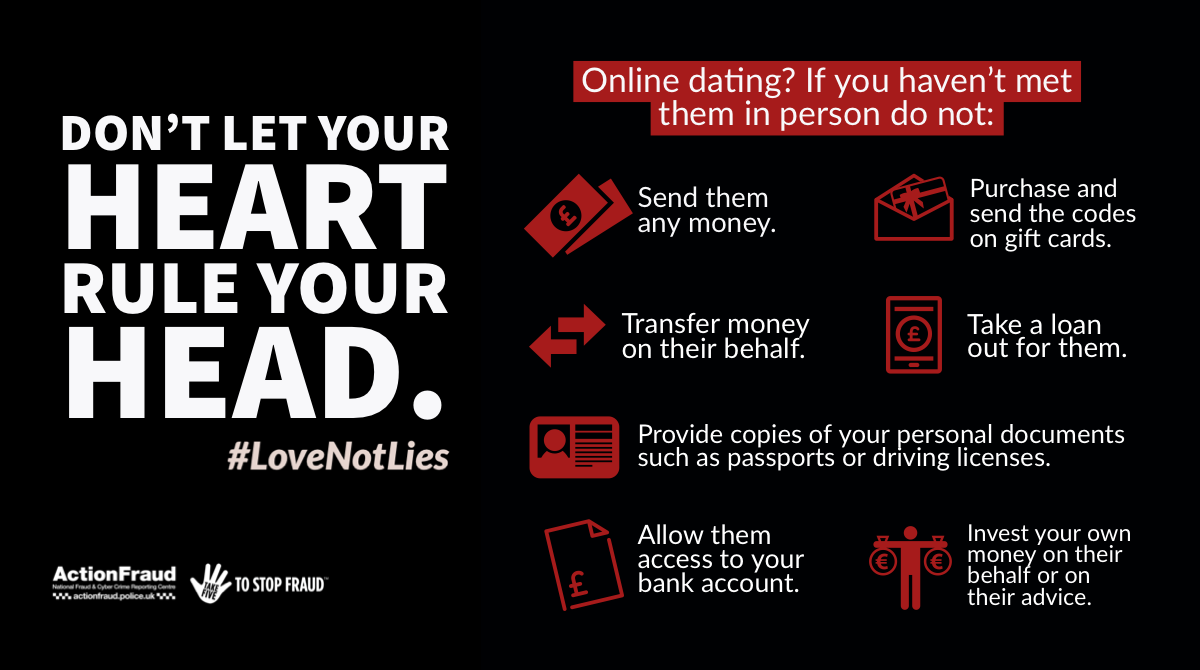 While the victim may well have suffered a financial loss, the trauma is two-fold as they also face up to the sudden demise of what appeared to be a very real relationship. If you ever find yourself in a situation like this, you may find talking about it with friends, family and even the police helpful in getting you through potentially difficult times.

I truly believe there is a scam out there for everybody. If you’re looking for love, there’s romance fraud. If you’re shopping online, there are counterfeiters. If you’re tech savvy and looking to dabble in cryptocurrency… you’ve guessed it… there are scams aplenty. I often hear people say they feel silly after falling victim to a scam.

You can stay one step ahead of the scammers though. Follow the hashtag #LoveNotLies on social media to see more tips on how to avoid romance scammers. You can head on over to www.actionfraud.police.uk for more advice.

If you want advice about scams in general, take a look at www.takefive-stopfraud.org.uk, where you’ll find helpful tips about everything from investment scams to identity theft. They’ve even got a section dedicated to Covid-19 related scams, which is well worth a read.

And lastly, don’t forget we’re always on hand. If you have any cyber security related questions, please feel free to get in touch. Email us at cybercrimeprevention@dorset.pnn.police.uk and, if we can help, we’ll get back to you ASAP!

Until next time, stay safe out there.