Today, the Taxpayers Alliance published a national report which criticised the cost of offices that support publicly elected Police and Crime Commissioners. 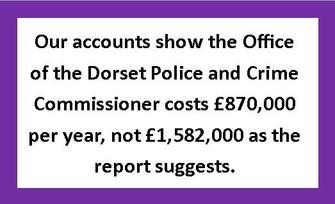 The Office of the Police and Crime Commissioner for Dorset disputes the figures detailed in the Taxpayers Alliance Report which is a crude comparison of PCCs across the country.

Their report is comparing apples with pears. Specifically for Dorset, the OPCC funds a number of additional services such as Victim Services and the Restorative Justice programme, which in some other areas will appear in a Force’s budget rather than with an OPCC. The actual cost of running the OPCC for comparison is £870,000 which is no greater than the previous ‘more invisible’ police authority. More details on our financial information can be found here. For fair comparisons the Taxpayers Alliance should have reviewed this figure.

In addition, the report is penalising OPCCs that have been successful in obtaining grants and other income to fund local services, as it appears only as spend not as additional income. For example, in Dorset, where the PCC has been successful in securing funding to deliver enhanced mental health services, this would appear negatively as an OPCC cost in the report, rather than as additional investment in the local community.

To compare police authorities with police and crime commissioners is grossly misleading, as the role of commissioner is much bigger and far more reaching than that of police authorities. For example, the PCC has a statutory requirement to engage and consult with communities across Dorset including victims of crime, to commission services and to work in partnership. The Commissioner also has a wider portfolio as the national lead for mental health in policing and is also responsible for support to victims after becoming the first in the country to commission local victim services in June 2014. He is also driving forward his Dorset Victims Bureau initiative – one of only two in England and Wales when it opened.

The report has wrongly stated that we have four ‘promotional’ staff. The OPCC employs four people in Communications and Engagement roles, delivering a lot more than the ‘promotional’ activity suggested by the TPA. For example, they arrange fortnightly local visits to towns and villages across Dorset to give the public an opportunity to meet the PCC and raise their concerns on policing and crime, conduct consultation with hard to reach groups and increase transparency of the work of the OPCC, through a detailed website and promptly responding to dozens of media enquiries each week.

Our staffing model is balanced with the PCCs priorities and those of the people of Dorset. We are successfully keeping office costs to a minimum using a number of people on fixed term contracts who are funded by grants to run community-focused projects. More information on the PCC’s staff is available here.