Latest Tweets
1 day ago
I welcome the changes that the Police, Crime, Sentencing and Courts act brings, especially the harder sentences for… https://t.co/5Hzbt6IBj5
Follow us

I’ve been very pleased to see Dorset Police launching a major campaign to deal with anti-social behaviour this week.

Operation Relentless is there to send a stern message to residents and visitors alike that the Force takes a tough approach to anti-social behaviour and that those involved will need to change their ways.

It’s aimed at empowering communities to help in the fight against anti-social behaviour by encouraging the reporting of incidents involving loud, abusive alcohol-related behaviour, drug misuse and intimidating gangs of people to the Force. 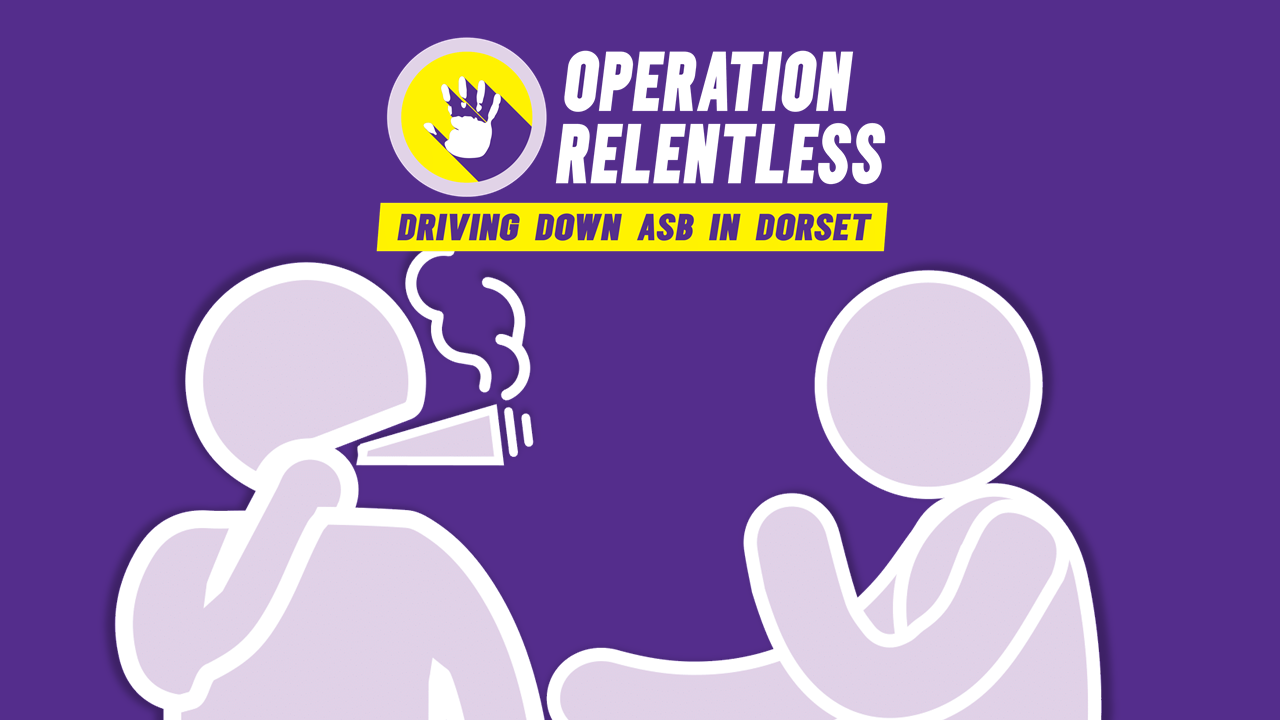 Tackling the problem is a key priority of mine and I’m delighted to see that now it is also a priority for the Force who are launching this operation within my first 100 days in office.

Throughout my years of campaigning to become the Police and Crime Commissioner for Dorset residents have told me that this is one of their biggest concerns. There was not the focus that there needed to be on this quality of life issue that grinds people down.

This concern certainly hasn’t stopped since I took up office, with my inbox regularly full of messages from residents telling me about incidents of persistent nuisance they have experienced, while people I meet across the county also regularly talk to me about their concerns.

I am absolutely determined that a consistent focus is now given to the problem.

I have also been out and about with Force officers as well as colleagues from both our local authorities, visiting areas which have experienced problems, finding out what’s being done to tackle these issues and what I can do to offer more support.

I’m glad to see that links between organisations that can deal with these problems are being strengthened, with some great examples of joined up working including Bournemouth’s Multi Agency Command Centre, coordinating the response to hotspot areas.

But there is so much more we can be doing, and tackling anti-social behaviour will be among the priorities in the Police and Crime Plan I am currently developing to set out the strategic direction both my office and the Force will be taking over the next few years.

Let me know your thoughts

This week has also seen the launch of my survey to ask people whether they agree with these priorities and whether they think my overarching goal of making Dorset the safest place in England and Wales is a suitable ambition. If you haven’t done so yet, please take a moment to let me know your thoughts. The survey only takes a couple of minutes to complete but the responses I get back will make a real difference.

The launch of Operation Relentless coincides with the UK’s first ever anti-social behaviour awareness week, running until 25 July.

Launching an operation to tackle anti-social behaviour is also significant right now because, although overall reports have fallen in Dorset over the last it few years, we traditionally find they increase over the summer months.

Although the police deal with many kinds of anti-social behaviour, it’s important people realise that many of these problems are the responsibility of other agencies. For example, local authorities deal with issues such as abandoned vehicles, graffiti and flytipping as well as loud music and noisy neighbours. A survey carried out by my office last year revealed there was a great deal of confusion as to who deals with what.

I’ll be working with these agencies to make sure we get the message across more clearly, so that residents know who they need to contact if they experience problems. But in the meantime, I’d encourage residents to visit Dorset Police’s ASK NED pages online where they can get more information.

You can also get advice, information about how to report problems and what you should expect when you report, on the Force’s anti-social behaviour page.

You can report anti-social behaviour at www.dorset.police.uk/do-it-online or by calling Dorset Police on 101. As always in an emergency where life is at risk or a crime is being committed dial 999.

We will be bringing more measures to address ASB and the causes of ASB as the Police and Crime Plan develops.