Latest Tweets
1 day, 7 hours ago
Great to see Weymouth cadets helping out at the marsh today. OPCC staff members have been down to get their bikes t… https://t.co/Rpepnd9XeX
Follow us

For most of the last three years, I’ve been talking to members of the public across Dorset about their views on crime.

This started while campaigning to become Police and Crime Commissioner – a period which was extended by a year as a result of the pandemic – and has continued since taking up the post, as I go out about across the county and receive correspondence from residents and businesses.

Now, as I develop my Police and Crime Plan for the county, setting out how I will steer the direction of Dorset Police and my own office over the coming years, I have formalised this process by launching a survey asking people about their priorities.

The results of this survey will fine-tune my plan before it is unveiled in October, but it is already in the advanced stages of development. In fact, I have spent the last few days examining an early draft of the plan, and I was pleased to see that many of the themes contained within it chime closely with ideas which have just been announced by the Government.

The Dorset plan centres around what people have told me they care about, and that is a robust focus on tackling crime and anti-social behaviour – those incidents of nuisance behaviour which when viewed as one-offs can appear minor, but when experienced as part of a persistent pattern can make someone’s life hell and can ruin neighbourhoods.

Also key to my plan will be bringing community focused policing back to the streets of Dorset. This involves not only increasing the number of officers across our neighbourhood teams, but making them far more visible so they can play a role in preventing crimes. It’s essential that members of our communities should know who their local officers are and should be able to contact them.

I want to fight organised crime, particularly the county lines gangs who thrive by not only selling hard drugs in our towns but by exploiting those children and young people they drag into their supply chains. I’ve also been very clear that we need to tackle a range of hidden harms such as domestic abuse, hate crime and child abuse.

But as well as this, my plan will put victims and communities at the heart of everything we do – providing better support to victims of crime as well as building strong and resourceful communities.

What struck me about the Government’s Beating Crime Plan, announced earlier this week, was how close a lot of the ideas contained within it were to ideas in my own local plan.

Under its catchline – ‘fewer victims, peaceful neighbourhoods, safe country’ – the plan sets out a strategic ambition for cutting crime across England and Wales. 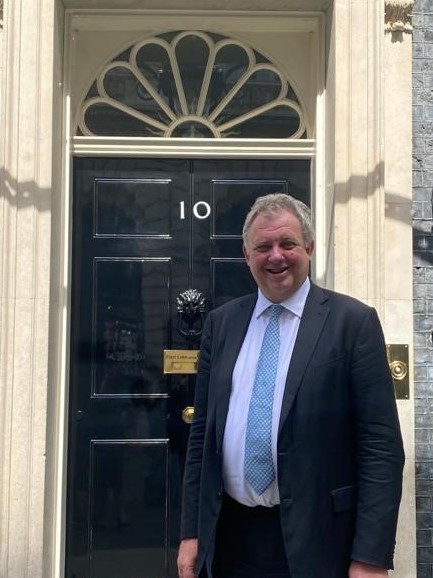 Along with other PCCs, I was fortunate enough to be able to attend a special event at Number 10 this week in which I found out more about the plan.

Many of the announcements were very reassuring to see, particularly the focus on anti-social behaviour, which many Dorset residents have told me is a major concern to them, and the intention of establishing the principles required for a strong and effective partnership response to the problem.

I have said for a long time now that it is absolutely vital that the police are at the heart of the communities they serve, that local people know who their officers are and have a direct line of communication to them. I’m delighted to see that the Government’s plan recognises the importance of reconnecting the police with the public and sets out measures to strengthen the role of our local neighbourhood teams.

I’m also pleased to see that the Beating Crime plan sets out an ambition of exposing and ending hidden harms and building the capacity needed to deal with fraud and online crime – a rapidly expanding problem which has seen many Dorset residents lose their life savings.

Other ideas in the Beating Crime Plan, such as introducing alcohol tags and investing in specialist activities to divert young people away from violent crime, are also central to my thinking and will feature in my plan for Dorset.

It’s good to see that so many elements of the Government’s plan reflect what residents have told me is important to them, and deal with very similar issues to those being addressed in my own plan.

This tells me not only that the Government are listening to PCCs like myself, but that I can hope for support as I work to deliver on this plan over the next few years and drive for Dorset to become the safest county in the UK.