Latest Tweets
14 hours, 7 minutes ago
Just a few days left to have your say on paying more to fund policing. Click here 👉 https://t.co/VoXTW27QjB https://t.co/INUgay7YOW
Follow us

Last chance to have say on police funding
Read more

Martyn Underhill is the first directly elected Police and Crime Commissioner for Dorset. 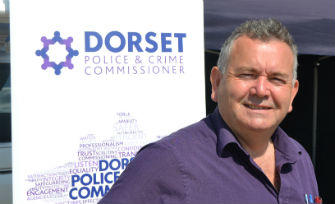 Martyn Underhill was first elected on 15 November 2012 as an Independent candidate and re-elected for a second term of office on 5 May 2016.

Martyn then became Project Manager for Child Rescue Alert, launching it in the UK in 2003 with Sara Payne. This alert system is based on Megan's Law in America.  He later took this to the Association of Chief Police Officers (ACPO) Homicide Working Group to ask for the pilot to be introduced nationally, which was achieved by 2006. On retirement Martyn moved to Dorset but continued campaigning for child safeguarding issues, including Sarah's Law which was introduced in Dorset in 2010.

As Dorset PCC, Martyn holds a number of engagement events across Dorset each year to enable people to raise their concerns about crime and policing. His office holds the Gold CoPaCC 2014 Award for Engagement and was also commended in the CoPaCC “PCCs and Innovation” Awards, September 2014.

On 5 May 2016, Martyn was re-elected as Dorset Police and Crime Commissioner receiving 66,660 votes when taking into account the first and secondary voting process.  Turnout in the election increased by 6% with 23% of voters taking to the polls versus the 17% who turned out in 2012.

At the end of 2019, Martyn announced that, having served two terms, he would not stand in the next Police and Crime Commissioner elections, which were due to be held in May 2020.

These elections were later postponed as a result of the coronavirus pandemic, and are now due to take place in May 2021. Shortly after the Government made this decision, Martyn announced he would remain in post until the postponed elections take place.

Find out more about Martyn's roles and responsibilities

Martyn has a Master’s Degree and Diploma in Criminology and is a qualified Project and Programme Manager. He lives in Wimborne with his wife Debs and enjoys walking his dogs, reading and gardening. Martyn is involved with numerous Dorset charities. He is Chair of West Howe Community Enterprise, Ambassador to Bourne Free and Trustee and Executive Board Member to Safewise, as well as trustee of the Police Memorial Arboretum Trust.  He is also Lay Canon for the Salisbury Diocese.

Martyn is committed to improving the journey for victims and in November 2013 with Victims Commissioner Baroness Newlove, he launched his initiative The Dorset Victims Bureau – one of only two in England and Wales. It will grow to become the first multi-agency victim’s service in the country.

In 2014, Martyn made history as the first PCC in the whole of the country to commission local victim services. This improved service with Victim Support will include a 24 hour helpline for victims of crime and business crime. The size of the Victim Support team will also double.

Former Victims Minister Damian Green said: “This contract was the first of its kind and shows the move to local commissioning is meeting the needs of the community in Dorset.”

“Martyn Underhill said: “I want to give victims a voice so I can hear about their journey and identify how to meet their needs. This new contract is step chance for local services. The contract will bring new victim categories into the support network such as victims of business crime and low level antisocial behaviour”.

In 2019, Victim Support were recommissioned to run the service for another three years. This contract included an enhanced service for victims of domestic abuse, including support from a dedicated caseworker, over the phone or in person, for as long as the victim needs it.

INVESTING IN OUR FUTURE

Nationally, Martyn was one of three PCCs responsible for the review and restructure of the Association of Chief Police Officers (ACPO) which has now become the National Police Chiefs Council (NPCC). He continues to work with the NPCC and sits on the Audit and Assurance Board. He is also passionate about investing in policing for the future to help protect future generations. Martyn has teamed up with Dorset Police and academics at Bournemouth University to launch a cybercrime campaign to help Dorset residents protect themselves against online crime.

Martyn has taken on the role as national lead for suicide prevention.

Martyn has reversed the police officer recruitment freeze that has been in place since 2009 and has doubled the number of volunteers in Dorset Police.

“Martyn Underhill said: “Despite operating in austere times we have to balance the workforce. It is right that we recruit new police officers and bring more volunteers into the policing family. The gap between the police and the public is closing.”

Martyn has welcomed the Government's 2019 announcement of plans to recruit another 20,000 officers, but has stressed that this investment will not reverse the damage caused by eight years of austerity.

As the Association of Police and Crime Commissioners’ (APCC) national lead on forensics, Martyn will look at how this essential service can adapt to better meet the needs of 21st century policing in the UK.

Working with Dorset Police Chief Constable James Vaughan, who is the National Police Chiefs Council (NPCC) lead on forensics, he will examine how the service can be modernised, become more efficient and cost effective, and how innovative uses of technology can be better shared between forces.

For a list of organisations which the PCC is a member of please see the Ethics and Appeals Committee, where these are disclosed quarterly within the 'PCC Notification of Disclosable Interests & OPCC Gifts and Hospitality Register – Appendix A'.